Expert Session series – The Future of Medicines: Spotlight on Oncology

Our Expert Session series continues with an exploration of the impact of both Covid and the recent ransom wear attack on Oncology in Ireland – both across the diagnosis and treatment of various cancers.
This series will take place over both 16th and 25th June with the sessions building on each other to give attendees a good understanding of Oncology, the challenges continuing to face the industry, and how the patients have been affected.

We’ll be joined on Wed 16th June by Averil Power, CEO with the Irish Cancer Society along with Eibhlin Mulroe, CEO with Cancer Trials Ireland.

Introduction to the Speakers: 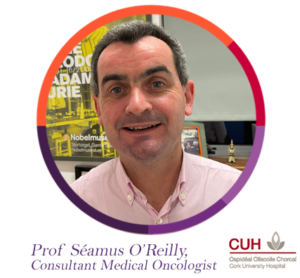 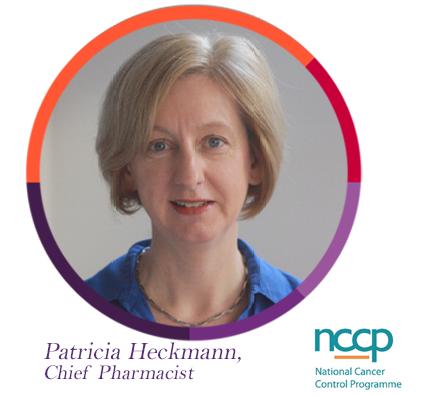 Patricia Heckmann qualified as a pharmacist at the University of Dublin, Trinity College, before completing a Masters in Health Informatics. She spent 22 years working in hospital pharmacy where she occupied many roles as a Chief Pharmacist before moving to the National Cancer Control Programme in 2013 where she holds the role of Assistant National director Systemic Therapy Programme and Chief Pharmacist. This is a multifaceted national role with a strong focus on patient safety and best practice, which combines project and service development, as well as cross-cutting responsibilities in the areas of tumour guideline development, community oncology and cancer intelligence.
Current key projects include the implementation of the recommendations of the National Cancer Strategy 2017-2026 and the roll out of the National Cancer Information System. 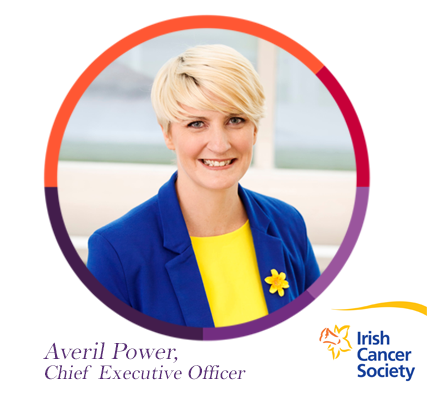 Averil is the CEO of the Irish Cancer Society, Ireland’s largest cancer charity. The Irish Cancer Society is a community of patients, survivors, volunteers, supporters, health and social care professionals and researchers, working for a future where no one dies from cancer. The Society directly provides information, services and supports to people affected by cancer; funds life-saving and life-changing research; and drives improvements in public services to advocacy and campaigning.
As CEO, Averil led the development of the Society’s new five-year strategy, launched last year. It sets out an ambitious vision that by 2025, three out of four Irish cancer patients will survive their diagnosis, and everyone affected by the disease will have access to world class treatment, care and support. To achieve this vison and drive forward the strategy, Averil is leading transformational change within the Society and the wider cancer environment.
Averil has almost 20 years’ experience of policy-making, strategic leadership and campaigning as a charity leader, Senator and Government advisor. She has a degree in Business, including not-for-profit management, from Trinity College and is a qualified barrister. Averil is respected in the public space as an advocate and change-maker and was a recipient of a Woman of the Year award for her work on marriage equality. 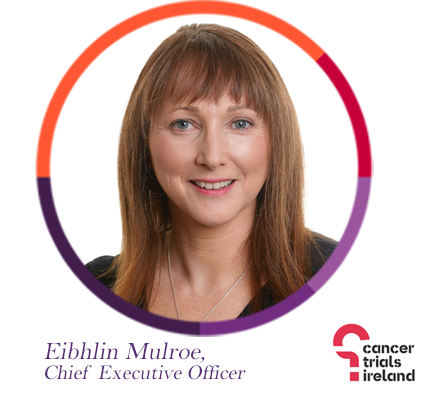 Eibhlín is CEO with Cancer Trials Ireland.  In June 2015 Eibhlín was appointed CEO of Cancer Trials Ireland (formerly ICORG) and manages a cross functional team including clinical operations, Data & Statistics, Quality and Pharmacovigilance. She has a BSocSc Hons from Queens University Belfast and is an MBA graduate from the Smurfit Business School, University College Dublin.   In her early career Eibhlín worked in Irish Politics and then the NGO sector. In July 2007, she became the first CEO of the Irish Platform for Patients’ Organisations, Science and Industry (IPPOSI) and Chair of a Task Force in the European Patient Academy for Therapeutic Innovation (EUPATI).  Eibhlín was appointed by the Irish Minister for Health to the Department of Health Steering Group on Rare Disease Policy in 2010, she represented patients on the  Health Information and Quality Authority (HIQA) Research Ethics Advisory Board, HIQA, HTA Advisory Board and was a member of the HSE Patient’s Forum. She served as the patient representative on the Legal Consultative Panel of the Irish Medicines Board (now HPRA).  Eibhlín led IPPOSI to partake in 2 EC Research Consortiums, BBMRI and EUPATI, the latter is a unique initiative to develop an EU Patient Academy. Eibhlin is a member of the following Boards/Committees. • Governance Committee of Blood Cancer Network Ireland (BCNI). • Steering Group of the Irish Health Research Forum • Advisory Board of the Cork Clinical Research Centre Eibhlin recently stepped down from the HSE’s Ehealth Board which she served on since it’s inception. 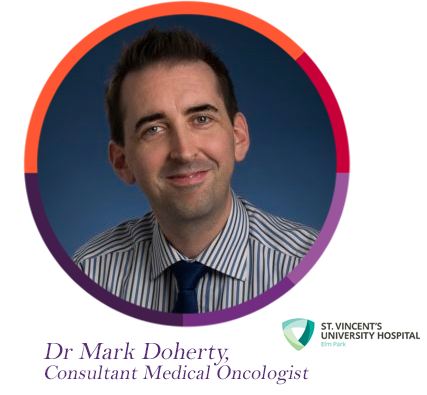 Dr Mark Doherty graduated from University College Dublin in 2006. He completed Basic Specialist Training in Medicine through the Royal College of Physicians of Ireland in 2008 followed Higher Specialist Training in Medical Oncology in 2015. This was followed by a Clinical Fellowship in Medical Oncology at the Princess Margaret Hospital, in Toronto, Ontario, Canada. In 2017 he was awarded a Master’s degree in Clinical Epidemiology and Health Care Research at the University of Toronto. Following this, he was appointed as Assistant Professor at the University of Toronto, and Staff Medical Oncologist at Sunnybrook Odette Cancer Centre from 2017 to 2020. In 2020, he returned to Ireland to an appointment as a Consultant Medical Oncologist at St Vincent’s Hospital Group. His academic focus is on developing therapeutic clinical trials to answer vital clinical questions, and using observational data to better understand treatment responses. He has published academic papers in important medical journals and regularly attends and presents at international oncology meetings.

Also joining the panel will be Gwynne Morley, General Manager with IQVIA Ireland.  Gwynne is former Director of Heart & Vascular, Diabetes & Emergency Department at the Mater Private Hospital and former Managing Director at Uniphar Retail Services division. She has extensive experience and knowledge of the pharmaceutical industry, from the manufacturer to the patient. Previously she worked for United Drug Group (UDG) Healthcare for 13 years where she was a member of the Senior Executive team. During her tenure with UDG, she held a number of senior roles namely in pre-wholesale, consumer, homecare and quality. Prior to joining UDG, she held management positions within the Crowley Retail Pharmacy Chain and held a multifunctional role within the medical department of Zeneca Pharma, Ireland. Gwynne is a pharmacy graduate of Trinity College, Dublin.

This Expert Series:  The Future of Healthcare – Oncology is proudly sponsored by: