As the technology and pharmaceutical industries continue to collaborate we are seeing some amazing leaps forward in treatments and overall patient care.   This has been such an exciting development for our industry, leading to some really innovative projects and shifts in thinking around the deployment of care and treatment.

We’re delighted to host an Expert Session series looking into the Future of Medicine which will delve into the topic of invention and innovation within the pharma industry.  The series will be one hour sessions taking place over 3 weeks each one building on the next.  This is effectively a 3 hour mini-masterclass presented in 1 hour bite-sized chunks.

As before, each session will be recorded and available to those registered afterwards for those unable to attend all three sessions live, or if you just want to remind yourself of content!

Martin joins us to give an update on the various projects and innovations underway in the HSE, and how this digital acceleration is impacting patient care and the continued move to extend treatment to patients in their homes.

Week 2 – March 24th, 8am – 9am – Future of Medicine: Driving innovation through collaboration

Alongside her day job as a Consultant Paediatrician, Prof Deirdre Murray is currently working with a gaming company to developing an App to track and identify cognitive development in children.  This company has recently spun out from the Innovation Department at UCC, support by Health Innovation Hub Ireland, and has attracted the attention of several pharma companies who are working alongside her.

2020 has seen a massive jump forward in the perception of wearable based health technologies, with their use accelerating to combat COVID-19 and deliver step changes to healthcare. Right at the forefront of this is Thrive Wearables.  Dr Jacob Skinner and his team are working with a number of pharma companies across a diverse range of therapy areas in delivering a new form of treatment and tracking real world evidence.

Week 3 – March 31st, 8am – 9am – Transforming Delivery of Care Through Technology

Colin has over 30 years experience in the pharma industry which cumulated in his role as General Manager with Boehringer Ingelheim.  In his role as Chief Scientific Officer with Patient mPower, Colin is driving high-tech care support at home to patients with chronic lung conditions.  They are working with numerous hospitals in Ireland, the UK and the US.  Colin will also touch on the impact of this technology in Health Economics.

Paul brings with him cutting edge health tech innovation,  mentorship experience and a strong network in the health tech sector globally. He has a 20 years experience in Medtech, Life Sciences and Medical Communication, and holds a PhD in Biochemistry and Molecular Biology from University of Southern California. He is an adjunct Lecturer at NUI Galway, an Honorary Clinical Fellow at NUI Galway School of Medicine, and has served as an advisor on the pan-european EIT Health Strategic Accelerator Board and to Health Innovation Hub Ireland.

Gwynne will also be joining each of the sessions.  During her talks she’ll be outlining the trends in this area, HCP engagement and what therapy areas will be affected by such collaborations in the future.

This Expert Series:  The Future of Healthcare – Innovation  is proudly sponsored by: 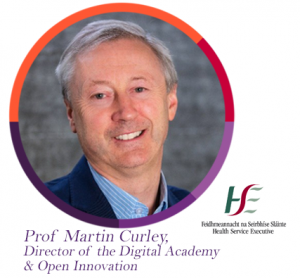 Martin  helping enable the digital transformation of Ireland’s health service. Most recently he was Senior Vice President and group head for Global Digital Practice at Mastercard. Previously Martin was vice president at Intel Corporation and Director/GM of Intel Labs Europe, Intel’s network of more than 50 research labs which he help grow across the European region. He also served as a senior principal engineer at Intel Labs Europe leading Intel’s research and innovation engagement with the European Commission and the broader European Union research ecosystem.
Prior to this Martin was Global Director of IT Innovation and Director of IT Strategy and Technology at Intel. Earlier in his Intel career, he held a number of senior positions for Intel in the United States and Europe. He also worked in research and management positions at GE in Ireland and Philips in the Netherlands.
Martin has a bachelor’s degree in electronic engineering and a master’s degree in business studies, both from University College Dublin, Ireland. He received his Ph.D. in information systems from the National University of Ireland, Maynooth. Curley is the author of numerous books on technology management for value, innovation and entrepreneurship. He is a Member of the Royal Irish Academy, fellow of the Institution of Engineers of Ireland, the British Computer Society and, the Irish Computer Society. Martin is co-founder of the Innovation Value Institute at Maynooth University, a unique industry-academia collaboration driving research and development of advanced IT and Digital maturity frameworks.  He was previously a visiting scholar at MIT Sloan Centre for Information Systems Research and a visiting research fellow at the CERN Open Lab in Geneva. He was the inaugural winner of the Engineers Ireland Innovation engineer of the year in 2006 and was jointly awarded European Chief Technology Officer of the year for 2015-2016. 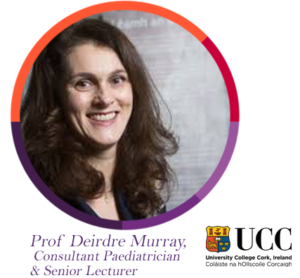 Deirdre graduated from UCC in 1995 and trained in Paediatrics in Dublin, before specialising Paediatric Intensive Care in leading International Paediatric Hospitals: the Royal Bristol Children’s Hospital and the Royal Children’s Hospital in Melbourne, Australia.
She returned to Ireland to persue a dedicated research post and completed the first PhD in the Department of Paediatrics, UCC in June 2008.  This thesis focused on early continuous EEG in neonatal brain injury and resulted in a number of important peer-reviewed publications in the highest impact Paediatric journal Pediatrics.  She took up her post as Senior Lecturer in the Department of Paediatrics and Child Health in 2008 and has developed her research interest into early brain injury and neurodevelopmental outcome since that time.  Prof Murray is the Principal investigator of the Cork BASELINE Birth Cohort Study and through this study, funded by the National Children’s Research Centre has established a large extremely well phenotyped birth cohort with the first neonatal biobank in Ireland.  In 2012 she was the first Irish Paediatrician to be awarded the prestigious HRB Clinician Scientist Award to develop her research in the field of novel biomarkers in Hypoxic-Ischaemic Encephalopathy through the BiHiVE study. In 2013 she became one of 9 Principal Investigators in the Irish Centre for Fetal and Neonatal Translational Research (INFANT centre).  In 2018 she was promoted to Prof (Scale 2) in the Dept of Paediatrics and Child Health and took up the role of Head of Department.  In 2019 she became the Clinical Lead for Paediatrics in Cork University Hospital.

Colin is CSO with patientMpower – a digital healthcare company specialising in monitoring lung and kidney health.  He is responsible for development and implementation of the clinical evaluation programme for patientMpower in respiratory disease (idiopathic pulmonary fibrosis, post-lung transplantation, Covid19) and renal conditions (hemodialysis, post-kidney transplantation).  He is a member of the Irish Thoracic Society Interstitial Lung Disease Registry steering group.  He founded Merlin Consulting Ltd in 2015 to advise creators of digital health products and develop robust assessments of the impact of new technologies on patient outcomes.
Colin was previously General Manager/Head of Medical Affairs at the Ireland affiliate of Boehringer Ingelheim.  He is a member of the Institute of Directors in Ireland.