Our first Voices of Pharma event of 2021 will focus on the “hot topics” facing all of us just now:

Joining us to discuss these topics will be: 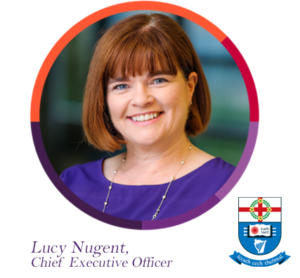 Lucy joined TUH as Chief Operations Officer in 2014, moved to the role of Deputy CEO in 2016 and was appointed CEO in January 2019. Prior to joining TUH she worked in the Acute Hospitals Division as Head of Quality Assurance & Risk Management, Clinical & Patient Services Manager in the Children’s University Hospital Temple Street. Prior to that she worked in a number of nursing roles as a registered general and children’s nurse. In addition to her nursing qualifications Lucy has an MSc in Healthcare Management (TCD), BSc Nursing Studies (DCU), a Diploma in Infection Control (RCSI) and a Diploma in Leadership & Quality in Healthcare (RCPI).  She is the immediate Past President of the Health Management Institute of Ireland and has represented it on several committees of the European Association of Hospital Managers.  TUH is one of Ireland’s largest acute teaching hospitals, with 495 adult beds, 67 paediatric beds and over 3,000 people on staff.

Topic: Lucy will give some insights into how one of the largest hospitals in Ireland has managed the Covid pandemic – from operational changes, managing & supporting her staff  in a highly stressful and often dangerous environment and impact this virus has had on delivering care to patients. 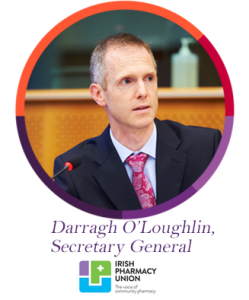 Since qualifying as a pharmacist 1994, Darragh has worked in both hospital and community pharmacy, and has operated his own pharmacies in the west of Ireland for almost 20 years. He received Bachelor’s and Master’s Degrees from Trinity College Dublin and has also gained qualifications from the Institute of Commercial Management and Henley Business School in the UK.

Darragh advocates consistently for a greater recognition of the contribution that community pharmacists make to patient health and for an expansion of the role of pharmacists in delivering convenient, accessible and cost-effective healthcare for the benefit of patients, the public and health systems.
He is a former President of the IPU as well as a former President of PGEU, the pan-European community pharmacy organisation.

Topic: Darragh will be discussing the impact Covid has had on pharmacists, what the future of pharmacy looks like and the role they will play in the vaccination rollout. 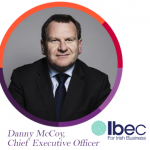 Danny has held the role of CEO with Ibec since 2009. Ibec is Ireland’s largest business representative organisation and the country’s largest lobbying group. It has 240 staff in seven locations and has 38 sectoral brands and substantial presence within the European Union through Ibec’s Brussels office.
Prior to joining Ibec, Danny was a senior economist at both the Economic and Social Research Institute (ESRI) and the Central Bank of Ireland in Dublin. He has held lecturing posts at Dublin City University, University College London, University of Oxford and Trinity College Dublin. He has been a consultant for the European Commission and the OECD. He has been a member of the Irish National Competitiveness Council, the National Economic and Social Council, the Commission on Taxation and the National Training Agency. He led a European Macroeconomic Forecasting Network for the European Commission of eleven national research institutes.
He currently is President of the Statistical and Social Inquiry Society of Ireland, Honorary Fellow of the Academy of Engineers, member of the Export Trade Council and the Executive Bureau of BusinessEurope.
His academic work in the early 1990s covered carbon taxation and Sustainable Development for which he received a ESR scholarship and the Barrington Medal for researchers under 30.

Topic: Danny will outline the economic of impact of Covid, what we’re facing into right now, and how we can avoid a recession in Ireland.

This event is recorded and will be available to view at your leisure for those registered.

The Voices of Pharma Series is proudly sponsored by: