Our second Women in Leadership lunch in 2019 will feature Liz O’Donnell as our guest speaker.
Prior to joining MSD as their Director of Policy, Government Affairs & Communications; Liz held many varied roles in her career including  journalism, public affairs consultancy, lecturing and of course her time as a politician. 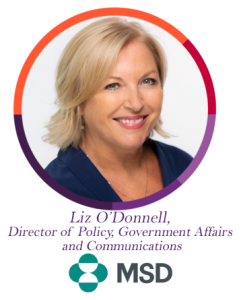 Liz started her career as a lawyer, graduating from Trinity College Law School.  She has been Vice Chair of the Women’s Political Association and worked on the Presidential Campaign of Mary Robinson. She was first elected to Dublin City Council in 1991 for the Rathmines Ward.
Liz was first elected to the Dáil in 1992 and served as Progressive Democrats TD for Dublin South from 1992 to 2007. She had a distinguished career in the Dáil that began as PD spokeswoman on Health and Social Welfare from 1992-93.  She served as Party Whip and Justice Spokesperson from 1993-97.  Liz is also the current Chair of the RSA.

The Women in Leadership series is proudly sponsored by: