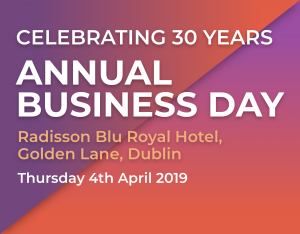 We’re delighted to have a strong panel of speakers for our 30th Annual Business Day on April 4th.  Our speakers are a mix of key industry stakeholders, subject matter experts and a motivational businessman who battled back from bankruptcy to set up the now world famous Pendulum Summit.

MC for the day will be broadcaster, columnist and author Ivan Yates.

Darragh is Secretary General of the IPU, the professional representative and leadership organisation for community pharmacists in Ireland. He is a former President of the IPU as well as a former President of PGEU, the pan-European community pharmacy organisation.
Since qualifying as a pharmacist 1994, Darragh has worked in both hospital and community pharmacy, and has operated his own pharmacies in the west of Ireland for almost 20 years. He received Bachelor’s and Master’s Degrees from Trinity College Dublin and has also gained qualifications from the Institute of Commercial Management and Henley Business School in the UK.  Darragh advocates consistently for a greater recognition of the contribution that community pharmacists make to patient health and for an expansion of the role of pharmacists in delivering convenient, accessible and cost-effective healthcare for the benefit of patients, the public and health systems.

Orla is a Consultant Neurologist at Beaumont Hospital.   She also holds the posts of National Clinical Lead – Neurology with the HSE and Clinical Professor of Neurology at Trinity College Dublin.
Born in Dublin and educated through Irish at Colaiste Iosagain, Baile an Bhothar Baile Atha Cliath, Orla is a graduate of University College Dublin.  She was awarded a B.Sc. (first class honours) in Physiology (1980); First place in Medicine in her final MB.BCh.,BAO in 1983, and her MD in 1992.  She underwent post graduate training in Dublin, and subsequently moved to Boston to undertake Neurology Residency training at Harvard Longwood Neurology Program where she was Chief Resident in Neurology (1988-1989).  Her primary research interests include the epidemiology, causes and new treatments for Motor Neurone Disease (also known as amyotrophic lateral sclerosis (ALS)).

Professor Martin Curley, Director of the Digital Academy and Open Innovation at the Health Services Executive

Martin is Director of the Digital Academy and Open Innovation at the HSE, helping enable the digital transformation of Ireland’s health service. Most recently he was Senior Vice President and group head for Global Digital Practice at Mastercard.  Previously Martin was vice president at Intel Corporation and Director/GM of Intel Labs Europe, Intel’s network of more than 50 research labs which he help grow across the European region. He also served as a senior principal engineer at Intel Labs Europe leading Intel’s research and innovation engagement with the European Commission and the broader European Union research ecosystem. Prior to this Martin was Global Director of IT Innovation and Director of IT Strategy and Technology at Intel. Earlier in his Intel career, he held a number of senior positions for Intel in the United States and Europe. He also UCD. He received his Ph.D. in information systems from the National University of Ireland, Maynooth.  Martin is the author of numerous books on technology management for value, innovation and entrepreneurship.

Vicky is the CEO at Rare Diseases Ireland, the national alliance for rare disease patient organisations across Ireland. In her role she is responsible for representing the views and opinions of some 300,000 individuals with rare diseases and their families to ensure that their voice is heard and is central to the development of healthcare services in Ireland.  Vicky’s son has an as yet undiagnosed rare disease and her own personal experience managing the challenges that this presents gives her some insight into the individual challenges facing the wider community.   Vicky came to Rare Diseases Ireland from industry where she spent 20 years in various leadership roles within the life-sciences sector between the US and Ireland.

Ian is a specialist health writer and senior creative with a passion for behavioural science. He heads up the copy team at Pegasus and is responsible for messaging, tone and voice and content.

Passionate about authentic leadership, professional elevation, self-empowerment, business excellence and peak performance, Frankie founded Pendulum Summit in 2013 following bankruptcy.    The summit has since grown from 600 attendees in 2013 to over 7,000 across two in days in 2019, becoming the world’s leading business, leadership, and self-empowerment conference in the process.
In his previous life, Frankie spent 14 seasons in the service of Munster and Ireland Rugby before retiring due to injury in 2009.
Following retirement, Frankie founded Front Row Speakers, which has become the fastest growing speakers’ bureau in Ireland and the UK. 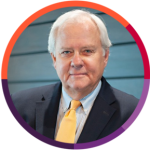 Jack is a recognized physician leader with expertise on health strategy and leadership who has built broad and deep relationships throughout health care.  He recently retired as Executive Director (CEO) of The Permanente Federation, headquartered in Oakland, CA.  Prior to this, Dr. Cochran served as Executive Medical Director, President, and Chairman of the Board of the Colorado Permanente Medical Group (CPMG).  A frequent speaker and author on a broad range of health care topics including health care delivery system reform, integrated care delivery, and health information systems, Dr. Cochran’s insights are gained from decades of work on the front lines of healthcare.  Dr. Cochran has participated in implementing many of the priorities called for in health reform, including Kaiser Permanente’s electronic health record, the largest successful private clinical information systems deployment in the world.   He frequently collaborates with and addresses prominent health plan boards, federal health care agencies, and academic institutions.

Packie started his football career with Donegal club Keadue Rovers FC.  In 1978, he became Jock Stein’s last ever Celtic signing. The following year Packie Bonner made his first team debut and over the next 12 years, he made the number one jersey at Parkhead his own and made 642 appearances for the Hoops before retiring in 1996.  Packie made his Irish football debut on his 21st birthday against Poland in 1981 and over the next 13 years, he became first choice goalkeeper for Ireland winning a record 80 caps.  He’s best remembered for his penalty save at the 1990 World Cup, which, along with David O’ Leary’s successful strike, earned Ireland a place in the World Cup Quarter-finals.